when i was 8, i met my half-sister as a newborn in a stroller, shortly after my parents started their divorce proceedings. my mom and i ran into my dad with his new family at a local fair, by the strongman game.

by this point, i had seen a lot of violence between my parents -- and as my dad said 'Danny, this is your sister, Chelsea', it was strange to feel both sadness at the idea of new life being brought into what we'd all experienced together, and excitement at the possibility that her arrival might signal an end to it.

unfortunately, things unfolded along the former trajectory. as i grew up, i often wondered about Chelsea but my mom clung to the narrative that this door should be left closed. still, i held private hope that i'd find a way to be a part of her life as i got older. when i entered adulthood, though, i was pretty unmoored and didn't feel like our connection could be of any benefit to her -- i had also begun a process of disentangling myself from the family i did grow up with, and the idea of seeking more familial connections seemed like it'd just be messy.

so, about a decade ago, i released the idea that we'd ever know each other -- given our shared history, this was likely for the best.

as part of a semi-annual 'i wonder if...' search online, Chelsea found sound + process and, at the encouragement of her younger half-brother from her mother's next marriage, reached out to me via lines.

i panicked and shut down -- i told her i wasn't interested in personally connecting and didn't respond to her follow-up messages. that weekend, i asked everyone i knew with siblings whether, ignoring the bonds forged from shared childhood experiences, they'd choose them now. responses were mixed, but confirmed that the best relationships (blood or otherwise) are often rooted in consistent and mutual choice. every answer identified the same work that all relationships require, the only difference between the affirmations and declinations was whether that work was currently happening.

so, on a long train ride between north carolina and new york, i wrote her an email apologizing for the way i met her bravery + clear-heartedness, shared some of the reasons behind it, and opened the door.

over the course of a lot of long phone calls, Chelsea helped me excavate the space which i had poured fear into for 26 years. through her honesty and willingness to take things as they went, we were able backfill it with ease, care, and love.

and last november, i got to meet her and the family she's starting: 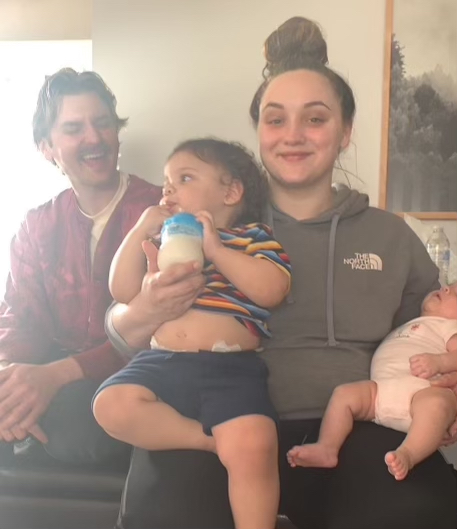 an ask for assistance

i'd like to help Chelsea and her partner navigate a recent bout of housing + employment troubles. i'm hoping to gather a bit of a solid foundation for them, so that they can begin building a life beyond their circumstances as a low-income, multiracial family. this includes enrolling in continuing education (her partner is looking to get his GED and Chelsea's pursuing nursing licensure + returning to college), being able to reduce their gig-economy work hours to actually apply for / interview for higher-paying + stable roles, fixing their car from a recent drive by-shooting while on a DoorDash run (thankfully, the kids were not in the car and neither Chelsea or her partner were hurt), and taking care of the past due bills which have piled up as they traversed a months-long runaround from housing authorities in Massachusetts.

to donate, please visit our PayPal fundraiser. everything will go to Chelsea + her family directly -- i'm only organizing to hopefully cast a wide net.